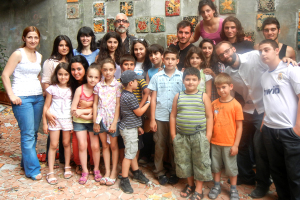 Until I came to Armenia, the country was an abstraction for me. I knew of its history, I was aware of its existence in my psyche, but none of it was tangible. The moment I got off the plane, the country, the land, the people, all materialized and became real. Initially, my plan was to spend 5 weeks in Yerevan with Birthright Armenia as a participant. I ended up staying for over 4 months.  I was supposed to work at an institution called Ghoghanj which partners with local schools and receives references of socially disadvantaged children, according to their website services 110 at-risk youth, offers them 11 classes, and has 3 psychologists on staff.

This sounded like the perfect organization and I was extremely excited to start working. Soon after starting to work at Ghoghanj, I realized that, although they did a wonderful job with the children, there was an important element missing in the program. Many of the kids came from broken homes and spent their days bouncing from their dysfunctional homes, to their schools, to Ghoghanj, with no one-on-one, long term, positive adult relationships in their lives.  I believe that this lack of one-on-one involvement isolates them from the larger world and deprives them of a sense of individuality, a sense of personal worth and consequence in the world.

As I did more research on similar organizations, I realized the long-term role-modeling element was missing in all of them. No organization had the funds to provide every child with concentrated individual attention.

Instead of being disappointed, I saw this as a great opportunity to start something new.  After all, the whole idea of coming to Armenia was to be of use and to try to make a difference. Regardless of their limitations, all these centers helped the children, kept them away from the streets, and endowed them with useful skills. Through Ghoghanj I discovered a gap, a need, and all I had to do was figure out a way to address it.  This is the reason which propelled me to start Side-by-Side (Goghk-Goghki).

Side-by-Side is a mentorship program based on the “Big Brothers, Big Sisters”, model and adapted to the social needs of Armenia.  Among other things, the mentorship project has two elements which are crucial for the development of the children, as well as Armenia.

1. It allows young professional adults to become role models to socially disadvantaged youth for one year, and provides the support, confidence, motivation and love they need in their lives