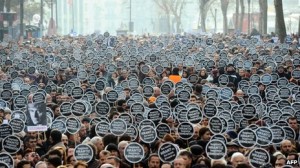 On the sixth anniversary of his assassination and more significantly, on the sixth anniversary of the Turkish state’s inability or unwillingness to find his real killers, Hrant Dink was remembered by tens of thousands of people in many countries as well as in Turkey, including Istanbul, Ankara, Izmir, Diyarbakir, Malatya, and Bodrum. Throughout the world, Turkish and Armenian speakers repeated his vision and message of direct dialogue between Turks and Armenians. Year by year, instead of gradually diminishing in numbers toward oblivion, as is the case for other assassinated journalists in Turkey, there is a snowballing increase in the number and intensity of people attending the Hrant Dink commemorations, protesting and demanding justice, as well as adopting Hrant’s message with more determination. It is not the tiny Armenian community in Turkey, but Turks (and Kurds) from all walks of life who have embraced Hrant as a tragic hero. The momentum is building to declare Hrant a martyr—the first shared martyr by the historically opposing nations of Armenians and Turks.

But what exactly was Hrant’s message? He would define Armenians and Turks as two sick people, clinical cases—Armenians suffering from trauma (obsessed with 1915) and Turks suffering from paranoia (fear of consequences of acknowledging 1915). He would advocate Armenians and Turks to be each other’s doctors, with dialogue as the only prescription. And he would clap his large hands vigorously, exclaiming, “There is no other medicine, no other doctor, no, no, no.” He knew dialogue would be useless if one couldn’t discuss the painful year of 1915, but only pleasant subjects such as Turks’ and Armenians’ shared values, shared culture, shared foods like dolma and kebab. He knew that dialogue would also be useless if one was unable to really “listen and hear,” in addition to talk. And most importantly, he knew that dialogue would be useless if one didn’t know the real historical facts of 1915. After being systematically brainwashed by the state with ever-changing official versions of history, people in Turkey have now finally started to learn the true historic facts, reasons, and consequences of 1915, not just the Turkish version versus Armenian version. So, if and when there is willingness to talk and listen, both sides can and should engage in direct dialogue, without the need to convince third parties to pressure the other side.

Hrant had studied zoology, and he would explain that if you remove any living organism from its natural environment, you would cause its extinction. He would then say, “If you remove an entire people from its land where it has lived continuously for 3,000 years, even if you transport them with great care in ‘golden airplanes,’ this would still be similar to taking an axe to the roots of an ancient tree.” He didn’t need to explain 1915 with long words; in a corner of the Agos newspaper, every week, he would place some facts about a village or town in Anatolia—could be in west, east, north, south, or central Anatolia—giving the Armenian and total population numbers, the names and numbers of churches and schools there, before 1915. He would have photos of these active Armenian churches and schools in that village or town before 1915, and photos of these non-existent churches or schools today, totaling more than 4,000 buildings. That would be enough for anyone to understand the reality of 1915.

But he wouldn’t only talk about the Armenians gone or dead in 1915. He was much more interested in talking about the Armenians who remained, who stayed in Anatolia, who stayed and survived, but no longer as Armenians. These were the Armenians who survived by converting to Islam, by assuming Turkish, Kurdish, or Alawi identities. These were the Armenian girls and boys captured or sold, kept hidden, protected or married to Turks and Kurds. And entire Armenian villages that converted to Islam, or stayed protected by friendly Kurdish and Alawi leaders. Hrant was obsessed with this subject. What happened to these people? Did they secretly keep their Armenian identity? Did they pass it on to the next generations? Where are they now? How many are there? If there are “hidden Armenians,” what would be the trigger for them to “come out of hiding”?

Genocide is not a single event but a continuous process. It is not only denial of a genocide that continues it, but also assimilation and conversion that continue it. Scholars have recently started defining genocide not only as the destruction of an oppressed nation, but also the construction of the oppressor nation—using assimilation and conversion processes. For Armenians, these processes continued on all fronts.

Hrant didn’t or couldn’t write much about this sensitive subject, but he was preoccupied by it, gathering stories, anecdotal evidence, always encouraging others to find out more. Clearly, this was not a subject that could be researched openly and scientifically, but whenever a new revelation came out about hidden Armenians in Anatolia, he would be greatly excited. His lawyer Fethiye Cetin’s book My Grandmother was only an example of the fate of the hidden Armenians. In an interview with London filmmaker Nouritsa Matossian for the documentary “Hrant Dink: A Heart Of Two Nations,” Matossian asked him, “Do you see Armenian faces in Anatolia?” Hrant: “Yes, often.” Nouritsa: “Apparitions [meaning, ghosts]?” Hrant: “Apparitions and real ones.” One could tell that Hrant, the emotional Hrant with the biggest heart, was like a child who had a secret he could hardly keep.

The answer to the question that kept him wondering—What would be the trigger for the hidden Armenians to come out?—came four years too late for Hrant to witness, unfortunately. The trigger was the reconstruction of the Diyarbakir Surp Giragos Church in 2011. Thousands of Anatolians, young and old, Turkish and Kurdish, in appearance and identity, returned to their Armenian roots with the reopening of this church. Some got baptized in the church, some changed their Turkish names to the Armenian original, some changed their identity to Armenian but remained Muslim (a new phenomenon of Muslim-Armenians), some started learning the Armenian language. Hrant would have danced with joy to see an 11-year-old Kurdish girl not only learning Armenian but also singing Armenian songs at the first Armenian concert in the Diyarbakir Surp Giragos Church in 2012. Hrant would have danced on the table after seeing a thousand people from Adiyaman, Amasya, Arapkir, Dersim, Diyarbakir, Elazig, Harput, Hemshin, Istanbul, Kastamonu, Kayseri, Malatya, Musadagh, Sason, Sinop, Sivas, Tokat, Van, and Yozgat organize activities together and celebrate the Surp Hagop Day in December 2012, singing Armenian songs, even though no one knew how to speak Armenian.

Hrant was an Anatolian Armenian and wished to have the same democratic rights as all other citizens of the state, without being excluded, without being discriminated against, without being pressured to lose his identity. Armenians wished to have exactly the same things 100 years ago—no more, no less. The state felt threatened, and when fear got combined with opportunity it wiped out the Armenian identity in Anatolia to build a Turkish identity that excluded all others, including Greeks, Assyrians, and Kurds. The enormous transfer of wealth and assets from Armenians to Turks has added to the fear and paranoia of the state in facing its past. A new Turkish identity, which does not fear diversity or minority identities, needs to be created in Turkey in order to face both the past and the future. The state has finally started this process with the Kurds, but not the Armenians. The Kurds have started this process with the Armenians, openly acknowledging their role in 1915, and starting to make amends. It is hoped that Turks will see the light and follow them.

Raffi Bedrosyan
Raffi Bedrosyan is a civil engineer as well as a concert pianist, living in Toronto, Canada. For the past several years, proceeds from his concerts and two CDs have been donated to the construction of school, highway, water, and gas distribution projects in Armenia and Karabagh—projects in which he has also participated as a voluntary engineer. Bedrosyan was involved in organizing the Surp Giragos Diyarbakir/Dikranagerd Church reconstruction project, and in promoting the significance of this historic project worldwide as the first Armenian reclaim of church properties in Anatolia after 1915. In September 2012, he gave the first Armenian piano concert in the Surp Giragos Church since 1915.