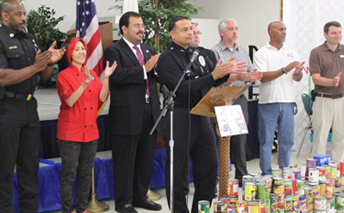 9021Pho and Vietnamese Master Chef Kimmy Tang joined with Greg Martayan and other community organizations at the C&E Merdinian Armenian School for a press conference to announce the early successes of the largest canned food drive in the San Fernando Valley, City of Los Angeles. Having already bypassed their goal of 10,000 cans, which translates into filling the plates of over 20,000 people in need, the community leaders and students celebrated the coalition’s milestone.

“It is a great honor to stand in support of such a noble cause with Greg Martayan.  The Los Angeles Police Department-Operations Valley Bureau, takes pride in being able to share in this special moment today within the San Fernando Valley,” stat