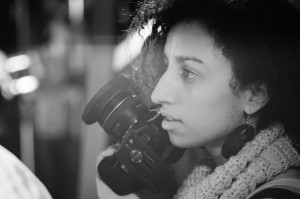 An Interview with Talin Avakian

Lilly Torosyan: You have quite an eclectic background—your father is Armenian, and your mother is of mixed African-American and Native-American ancestry. What was it like growing as part of three very different and historically oppressed cultural groups? Did you identify more with one over the other?

Talin Avakian: My background has a lot to do with my outlook on life, and what I have invested most of my time into, growing up. It has been both a great blessing and also quite a struggle. On the one hand, I have had the great fortune of being exposed to the richness of each culture, and on the other hand, I have felt the misfortune of not knowing where I truly ‘belong,’ because I have never been ‘full’ anything.

At times, I have definitely identified with one more than the other. It depends on who I’m with, and where I am. I guess in that sense you could call me a chameleon. I definitely have my ways of blending in where I want to blend in, which has been beneficial, fun, and painful for me. Growing up, I would say I ‘felt’ more Armenian, and that had a lot to do with the fact that I grew up in the Armenian Church, surrounded by my father’s side of the family most of the time. That is not to say my mother didn’t remind my sisters and I of who we were daily. I remember car rides when my mom would talk to us about slavery, and what it meant to be black and ‘Indian’ growing up in her time. Regardless of which community I spend more time with, I have always felt very much a part of all three of my backgrounds. Every family member always reminded me of the importance of knowing who I am and where I came from. I see it as my duty, as an artist, and as a representative of my people, to use my voice, through film, to give a stronger voice to my people, who cry out for recognition and unity.

L.T.: Are any of your projects embedded in your personal life? For example, ‘Danny Attuk’ is a short film about a Native-American man dealing with an identity issue. Is this more or less based on your own personal experience?

T.A.: I don’t usually realize this until most of the project is completed, but yes, most of my projects, if not all of them, are based off of my own personal experience to some degree. ‘Danny Attuk’ was a story written by the wife of a man in my tribe, which I adapted into a script, but I must have been intrigued by it because of its themes. Unlike the main character in the story, however, I have not intentionally removed myself from my tribe’s traditions—it is quite the opposite for me. The older I get, the more I want to know about who I am, and what our traditions are as a people.

L.T.: On your Vimeo account, it says that your films often deal with adolescence, social psychology, and movement. What draws you to these themes?

T.A.: I think the process of maturing into an adult is beautiful, and it is different for everybody. Children’s perception of reality is so peculiar, and I like to explore that in my work by shooting from their point of view. Unlike adults, they are not afraid to let themselves imagine and speak their mind—if not verbally, in some way or another. They are honest, vulnerable, and curious creatures. It’s amazing how much we lose from our childhood as we grow into adulthood. Through my work, I try to reconnect the world with what it is like to be a child again. L.T.: Your latest film incorporates all of these themes, as well. What was the motivation behind the protagonist, Sydney, the schoolgirl who suffers from selective mutism?

T.A.: I have always been interested in shooting from the point of view of a child, so I knew I wanted my protagonist to be a young girl. My mother is a speech language pathologist, and the idea of a child who struggles with speech—or doesn’t speak at all, like Sydney—caused me to ask questions like, what does their world look like? How are they viewed by their peers? I admired the empathetic and

personal approach that a speech language pathologist takes; it’s not just one curriculum for all students, it’s an individualized approach. It’s more about a relationship of trust and patience between a student and a therapist. Perhaps more approaches like this between adults and children would lead to children that absorb more knowledge, and are not as anxious in the classroom.

Through this film, I wanted to stress that communication is not always verbal; if anything, we nonverbally communicate more than we speak. Yet as a society, we are more accepting of those who articulate themselves more eloquently. Through this story, my intention is to challenge my audience to accept and understand those who may not choose verbal communication as their primary voice. L.T.: Talk about your future projects.

T.A.: For now, I’m working in Worcester, Mass., at an ad agency, helping out with shooting, editing, compiling, and splicing footage for the many TV spots they do for clients. I intend on continuing to make my own personal work, and collaborating with my colleagues from MassArt. We really built an amazing community and work ethic at MassArt that I hope to remain a part of for the rest of my filmmaking years.

Everyone asks me, ‘So, are you going to move to NYC or Hollywood?’ Those are not my intentions, at all, but I guess you never know where you’ll end up. I’m usually open to whatever opportunity comes my way. I would love to continue making my own films, working with my colleagues from MassArt in the indie film industry, making my work known through the film festival circuit.

For more information on Avakian’s films, visit her Vimeo account at

Lilly Torosyan
Lilly Torosyan is studying international relations and political science at Boston University (BU). She lives in West Hartford, Conn. Torosyan is active in the ACYOA and BU’s Armenian Students’ Association (ASA). After interning for the Armenian Weekly in Summer 2012, she started working for the paper as a staff writer in the Fall.