Posted on December 28, 2013 Posted By: SystemCategories: All News 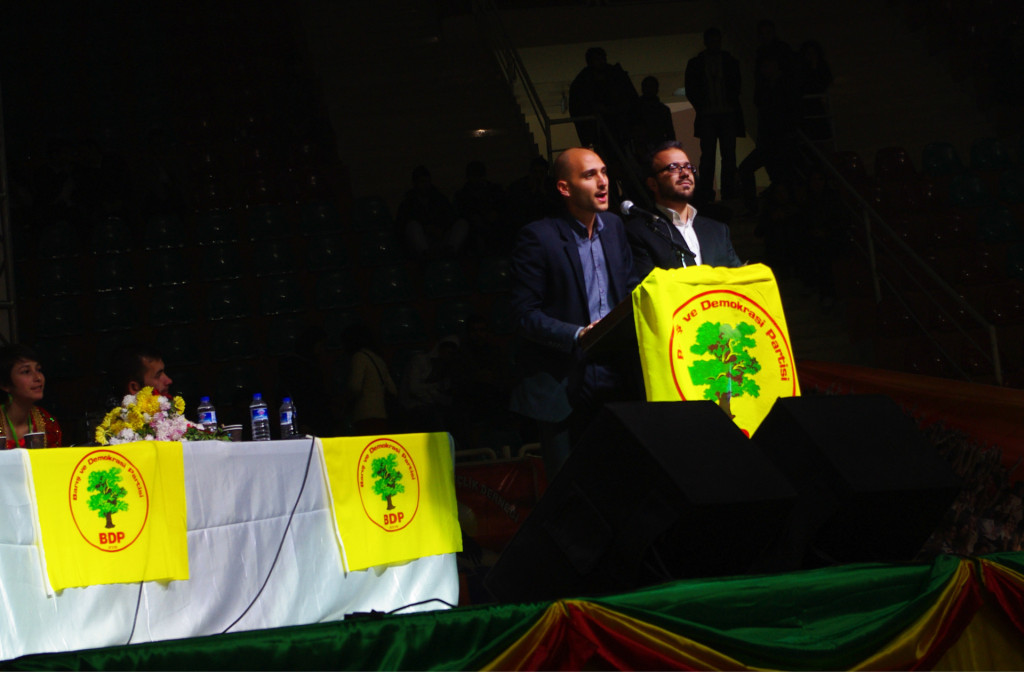 (Special to the Armenian Weekly)
‘Yes, I am Armenian. Fourth-generation Dikranagerdtsi…’
Things seemed to come full-circle when I heard these words come out of his mouth, albeit translated from the language I was brought up to hate. Navaf came rushing to the stage as we were coming off, ready to greet us with this piece of amazing news he had wanted to share for a long time now. My friend and I had just finished addressing the first youth conference of the Peace and Democracy of Turkey (BDP) in Diyarbakir (Dikranagerd). The mostly Kurdish crowd of supporters, upwards of 30,000, had watched in astonishment as two representatives of the ARF Youth and Student Organizations addressed the crowd first in Armenian and later in Turkish. (Read the report on the conference here.)
Although I had briefly studied the Turkish language during my university days, something within me, instinct perhaps, had never allowed me to become fluent; and so, I had the honor of addressing the crowd in Armenian. In a brief meeting with the conference organizers a day earlier, we had described why we’d be sharing our message in our native tongue. Our Kurdish counterparts said that the city of “Amed” hadn’t heard Armenian being spoken from a stage in almost a century, and agreed that it was time. One would assume that a stadium full of Kurds who don’t understand Armenian would be bored, uninterested, and ultimately indifferent—especially since we were speaking as representatives of a people who once called these lands “home.” Yet, we witnessed the exact opposite that day. As I read out loud what we had written in the Western Armenian dialect of my forefathers, the audience watched and listened attentively. It almost seemed like they understood everything I said. As if the words that had so eloquently been spoken in the streets of that city nearly a hundred years ago still had meaning for these people who were gathered there for a common, unifying purpose.
Growing up in Toronto, I was lucky to have attended Armenian school from kindergarten through high school. After graduating, I made an extra effort to immerse myself in everything Armenian, in an attempt to not become a victim of what some call the jermag chart (“white genocide”). I read as much as possible about our history, and I did my best to keep up with the latest in Armenian news in Armenia and the diaspora. But when I learned that I’d be traveling to historic Armenia to meet with Kurdish youth, I realized I knew very little about Armenian-Kurdish relations. All I could recall from my 15 years of Armenian education was that a Kurdish representative had been elected to the Armenian Parliament during the first republic. When speaking about the Kurdish people, Armenians generally recall the darkest pages of our common history—they remember the days of the Armenian Genocide and brush off the Kurds as the “ones who really killed our ancestors.” It is true that local Kurdish tribes were armed to attack the Armenians in many towns and villages across the Ottoman Empire during the genocide.
What is interesting, however, was that nearly a century after the genocide began, the descendants of those Kurds not only accepted our delegation in Dikranagerd with open arms, but actually apologized, time and time again, for the part some of their ancestors had in the genocide—something Armenians across the world wish to hear from the government of Turkey.
I couldn’t allow myself to be jaded by the negative narrative, so before making the trek to Dikranagerd I began reading up on the history of the Kurdish struggle in Turkey. What I quickly discovered was a story of a common history between our two peoples. I also learned about the good relations between Armenians and Kurds immediately after the genocide. From collaborations between the Armenian Revolutionary Federation (ARF) and the Kurdish organization Khoybounduring the Kurdish rebellions in Dersim and Ararat, to the establishment of Kurdish radio broadcasts and newspapers in Soviet Armenia, it was amazing how intertwined the modern histories of our two people actually were.
But what was truly eye opening and humbling was the way we were welcomed to the now mostly Kurdish-populated city that many of our ancestors inhabited. From the moment we were greeted at the airport, our hosts made it a point to make us feel at home. To make us feel like we had never left.
Hospitality is a trait Armenians have been known to value for millennia, but what we experienced in our six days in Dikranagerd was something I had, quite unfortunately, never felt in Armenia nor in the Armenian Disapora, not to that extent, anyway. These people, who I had heard only negative things about from so many of my compatriots, were not only taking us to all the sites of Armenian civilization and culture in the city, but were giving us the factual, unadulterated history behind these places.
They were ready to find common ground.
Falling in the narrative trap can go both ways. It’s always important to remember the past, to be cautious, and not take everything presented at face value. However, our time in Dikranagerd proved that there is a group of people there (who happen to constitute an overwhelming majority of the city) ready to build a common understanding between Armenian and Kurds. Moreover, they accept the validity of the Armenian Genocide and are brave enough to openly criticize the Turkish government’s policy of denial—in Turkey.
The Middle East is at a very significant juncture today. There is pressure for change, and the Kurdish people are central to these potential changes; this is a fact that all must accept. It is our duty as Armenians, regardless of where we may live, to have a vested interest in, for lack of a better term, the Kurdish Cause. Yes, for some it may seem too early or premature to develop a new Armenian-Kurdish global alliance, but it would be wrong not to begin the process of mutual understanding, of finding ways for our two people to cooperate rationally. We must at least speak to each other, face to face, based on mutual respect and consideration of the interests of both peoples.
Navaf was only one of the dozens who approached us that day after our talk, so eager to tell us about his Armenian roots and embrace us as if we were family. These people were proud of their origins. And they were proud to still be on the lands we’ve been taught to one day reclaim.
We should never forget the dark pages of our shared history with these people, but we should also not allow years of negative rhetoric to prevent the possibility of the realization of our people’s rightful cause. Let’s not let the “bad blood” stand in the way of something bigger.
Rupen Janbazian was born and raised in Toronto, Ontario, Canada. He is a graduate of the University of Toronto, where he completed a double major in history and Near and Middle Eastern civilizations. He has served on the local and national executives of the Armenian Youth Federation (AYF) Canada and Hamazkayin Toronto, and served as the administrator of the Armenian National Committee (ANC) of Toronto. Janbazian also taught Armenian history and creative writing at the Armenian Relief Society (ARS) Armenian School of Toronto. He recently relocated to Yerevan, where he works on a number of organizational and personal projects.

Rupen Janbazian was born and raised in Toronto, Ontario, Canada. He is a graduate of the University of Toronto, where he completed a double major in history and Near and Middle Eastern civilizations. He has served on the local and national executives of the Armenian Youth Federation (AYF) Canada and Hamazkayin Toronto, and served as the administrator of the Armenian National Committee (ANC) of Toronto. Janbazian also taught Armenian history and creative writing at the Armenian Relief Society (ARS) Armenian School of Toronto. He recently relocated to Yerevan, where he works on a number of organizational and personal projects.More Posts